Title – ‘I Killed My Mother‘

Hey Dekkoo’ers! We’ve got a special treat for you today. Film critic Kyle Turner is the guest blogger today and has offered a critical analysis of ‘I Killed My Mother‘, the first film by Canadian filmmaker Xavier Dolan. The film concerns the relationship (at times a very bitter relationship) between a gay high-schooler (played by Xavier Dolan) and his mother. It’s got great visuals, awesome, music, and super super sexy guys. Take it away Kyle!

Xavier Dolan may have beaten most of us to the punch when it comes to crafting your identity around moody monologues told to a camera, with abstracted close-ups and a performative sense of intimacy between the audience and the lone subject. At least, as far as the Internet age goes; though it’s inconclusive, the first YouTube coming out video was, according to KnowYourMeme, posted in 2007; the first popular YouTube coming out video was posted in 2011. The Quebecois filmmaker’s debut feature, ‘I Killed My Mother’, debuted at Cannes in 2009, directly between those public confessionals.

True, Dolan, or rather Dolan’s veiled alter ego Hubert, never explicitly comes out to anyone in the film, much less his on screen mother Chantale (Ann Dorval), nor is the angsty videotaping anything new, even within queer art, but there is something oddly profound about a young queer man treating the camera, and a movie audience, like the void in which it is safe to reveal your most dysfunctional relationship and how it impacts you.

“I don’t know what happened,” Hubert says, unable to find the root of the tensions between he and his mother. He almost never looks directly into the camera during these soliloquies, making the videos, shot in black and white (against the rest of the film’s rather colorful palette), reveal in Hubert an ambivalence. There is the call for attention, the desire to confide, and yet perhaps a trace of shame. There’s little more devastating than knowing a once loving, close relationship with one’s parent has decayed into a series of endless arguments, nitpicks, and battles over how power has shifted as a child moves recklessly from adolescence to adulthood. It is hard to admit that such a dynamic has soured, to you beyond fixing. And the jealousy that infects your every move, jealousy over the peers and friends and boyfriend whose parental relationships are normal, comparably delightful, makes you ache.

The ache is what colors those quasi-confessional videos, where Hubert rocks back and forth between vitriolic tirades padded with mildly philosophical musings about parent/child relationships (which are of the utmost showy, in a fun way), to a potent honesty about his regrets, about how he still loves his mother in spite of their fractured relationship. “It’s a paradox of having a mother that you’re incapable of loving, but incapable not to love.”

Certainly, Hubert is bratty; brattiness and insolence are heavily defining features of Dolan’s films, particularly ‘I Killed My Mother‘, ‘Heartbeats’, ‘Mommy’, and ‘It’s Only the End of the World’. While he has matured as a filmmaker and his ability to delve into the complexities of different kinds of relationships, the cheekiness that was there from day one still appears in his work; it’s either part of his charm or a turn-off. But that audacious brusqueness is what shapes his films as well; ‘I Killed My Mother‘ is well-aware of its rudeness, and it’s almost proud of it. It thrives in aesthetic approaches which reek of art school fag, an impudent rejoinder to conventional straight filmmaking, both earnest about how the film wants you to get lost in paint splashed against a wall and random shots of fake butterflies, but as much as a mockery of it. Without that backhandedness or brazen quality, the film’s emotional core would not work, at least not in the same way. 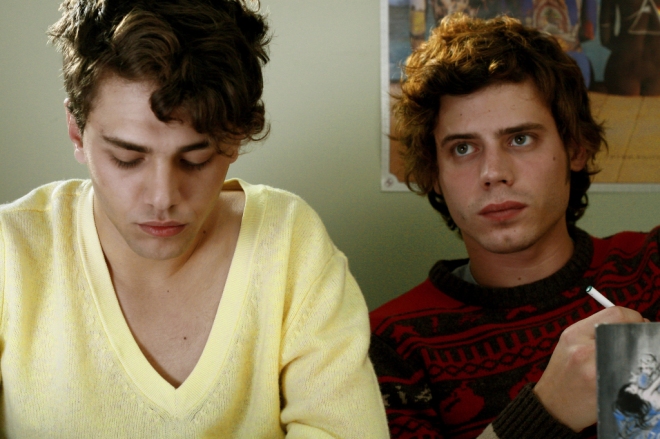 If the film’s primary tension is the way that Hubert communicates his relationship with his mother – flippant and volatile with her in the room, a bit more contemplative alone and with the camera – ‘I Killed My Mother’ needs something that hits the sweet spot of sweet and sour for Hubert’s character and therefore his perspective. You can’t let him off the hook for being sassy, nor can you help yourself from sympathizing. Dolan, as a writer, has struck a balance between someone who is able to be sympathized with but also worthy of being chastised, and back and forth. Without the rudeness, Hubert’s rawness and bareness wouldn’t feel as striking or resonant.

The film’s irony lays in understanding the kind of person who is both outwardly emotional but internalizes all of the doubt and shame and sadness. Angst and brattiness are, as always, only a shield for something else. He has no one else to really talk to, not even the teacher (Suzanne Clement) who lets him stay over – he’s never as intimate with her as he is to his camera. There, his blunt armor remains in place. It’s protecting the boy who’s heartbroken at his inability to understand his toxic relationship with his mother, never mind repair the damage. One of Dolan’s most accomplished scenes is in his first film. Remember the video where Hubert talks about the paradox of being incapable of loving his mother and incapable of not loving her? She finds it. She looks at the tiny LCD screen. Silently, her face changes. She’s heartbroken, too.

Watch it with:  Your loving mother 🙂

Mix it with: A Canadian white wine