Heya! I hope you got a chance this past weekend to catch our newest Dekkoo exclusive film ‘Screwed’, but if you didn’t it’s still there calling out to you from the sun-drenched shores of Finland. And if you did watch it then I’ve got a deep gem from our collection that I think you’ll have some fun with… 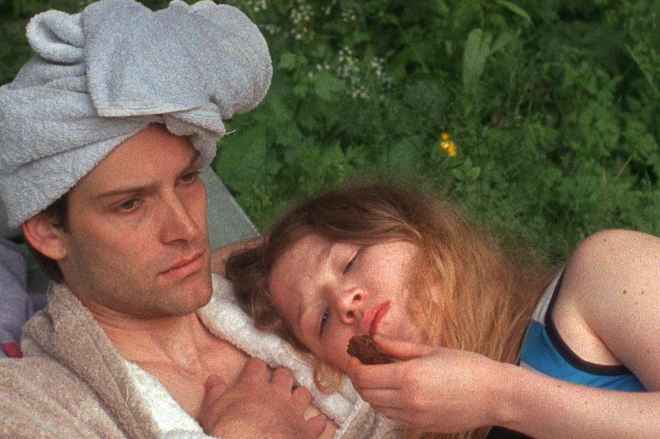 ‘Fort Buchanan‘ is the name of this unique piece of cinema hailing from an American director now living in France. As with someone that’s been immersing themselves in French life he decided to shoot the film in French and yet populate the movie with a decidedly American attitude and aesthetic including quite a bit of country music. I watched this last night with a friend and we were definitely taken aback by how unique the film is (especially once you’re past the initial 15 minute introductory mark). What starts as an ordinary relationship drama about a husband yearning for his husband who’s away at war develops into a layered film about fidelity, age, PTSD, and the acceptance of death.

The film contains four sections each taking place within the four seasons. Most of it takes place at a residence compound of sorts – the titular Fort Buchanan. Roger (our main character for most of the film which by the way only runs at one hour which is the perfect length for a slightly strange movie such as this one) lives at Fort Buchanan with his daughter Roxy along with many other army wives. He misses his husband Frank who’s away fighting in Djibouti and tries to keep his mind on staying in shape, reading, and wearing wild flashy jackets. The other army wives try and console him and encourage him to pursue ‘play dates’. Shocked at this new piece of information he digs deeper and finds out that all of the army wives occasionally sleep with women and so we begin to realize that their next target is Roger’s daughter. Chasing sex is most of what takes place in ‘Spring’.

Fast-forward to ‘Summer’ and we’ve traveled to Djibouti (in a fantastic CGI-ish transition that I went crazy over!) where we finally get to meet Frank and witness the interactions between the two. Meanwhile Roxy is exploring the local flavors and testing out her budding sexuality on the dance floor. Past this point I don’t want to say much more about the plot, but my advice is to go with the flow when it comes to the random character that shows up in ‘Fall’. It’s confusing at first, but he’s introduced for a reason to be sure. Oh I also need to be sure to let you know it’s shot in 16mm which adds to the hazy yet gorgeous nature of the film. It definitely feels like it was shot in the 80s or early 90s. Go check it out!!

Watch it with: A friend who enjoys an experimental adventure.

Mix it with: A light refreshing white wine.