Hallo from the Netherlands (or Holland if you’d prefer)! The home of Rembrandt, Van Gogh, and the inventor of solid chocolate! Ooh la la! It’s also home to a boatload of cute gay couples just waiting to invite you into their apartment so you can sleep on their couch while you worm your way into their lives without realizing it. Well at least I assumed from the movie ‘Cas‘ I just watched that that’s the case. Well I’ll just pretend to myself that it happens allll the time. You’ve gotta live for something…

‘Cas‘, a film directed by Joris van den Berg is actually a made-for-TV film which makes me instantly sad that I don’t live in the Netherlands and can’t have something like this broadcasting over the air permeating my entire body with it’s emotional and sexy brilliance. Running at only 48 minutes it’s a breath of fresh air as to what Joris is able to accomplish in such a short amount of time. The way in which the viewer enters the film and is quickly able to take stock of the current situation of the relationship is incredibly strong. We’re immediately aware that we’re in the presence of a couple that’s at the make-or-break stage. They love each other, but they both have long-term needs that could conflict.

Enter our main character Cas who will decide for them if they’re made for this pairing or if they just wish they were. Invited by Sjors to crash on their couch while he looks for a place to live, Cas shows up one day to Pepjin’s surprise. While we’re a little confused at first how the two met, it’s eventually revealed that Sjors had met up with him a few times previously. Pepjin’s reluctance gives way to a welcoming attitude once Cas’ love of 80s music and ‘Twin Peaks’ comes to light. Eventually after a drunken night out the three end up sleeping together and then the real relationship tests really start. 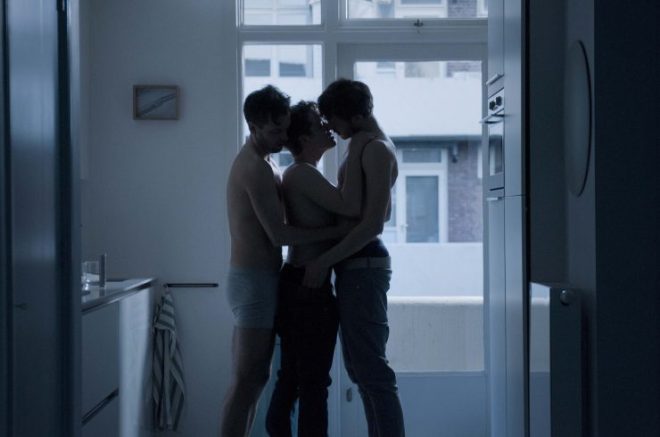 There’s so much to like about this film. Pepjin’s emotional fragility, Sjors’ tender daddy personality, and Cas’ puppy dog-like charm are a few of them. But other topics like the contrasting desires and goals in a relationship and the nature of monogamy are explored with such a delicate yet strong touch that reminded me of my own relationships and made me question what I want in my future relationships. All in all this is a fantastic 48 minute film and I can’t wait to see what Joris van den Berg is able to do with 96 minutes next time!

Watch it with: Your boyfriend and your houseboy.

Mix it with: A Heineken (it’s from the Netherlands!!)