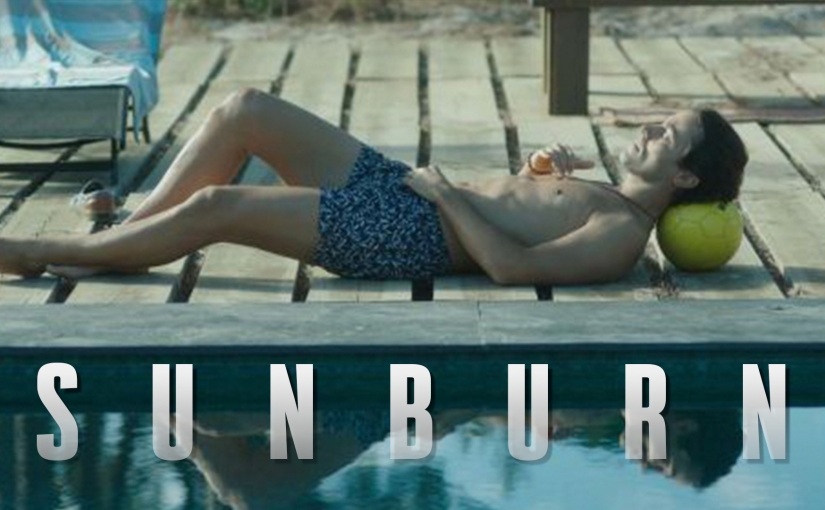 As the summer sun beams down on a gorgeous modern villa in the countryside of Portugal, a close-knit group of forty-something friends meets for a relaxing weekend by the pool. The group consists of Joana (Oceana Basílio), the stunningly beautiful lone female, and Francisco (Nuno Pardal), the man with whom she is planning to have a child; Vasco (Ricardo Pereira), a romantic looking to settle down into a committed relationship; and Simao (Richard Barbosa), a writer whose latest screenplay borrows heavily from their real lives.

Their peaceful camaraderie is soon upended, however, by a phone call from David, a former friend, previously ostracized by the group, who seems to have left a strong and lasting impression on each of them. After a long absence, he’s back in town and planning to stop by. It’s at this point that Sunburn, the newest film from writer-director Vicente Alves do Ó, begins to ramp up the dread and morph into a intriguing mystery. A reckoning, of some sort, is coming. What happened between David and the rest of the group to inspire such mixed emotions?

With a diverse writing background in film, television and theater, Vicente Alves do Ó became known in his country for creating successful biopics of some of Portugal’s most outcast poets. After his three first features, his 2017 film Al Berto (also available on Dekkoo) took him in a new direction, focusing on the LGBTQ themes. With a stellar cast and an eye for gorgeous compositions, Sunburn is a masterful addition to his already impressive resume.

Watch the trailer for Sunburn below. The film is now available on Dekkoo.