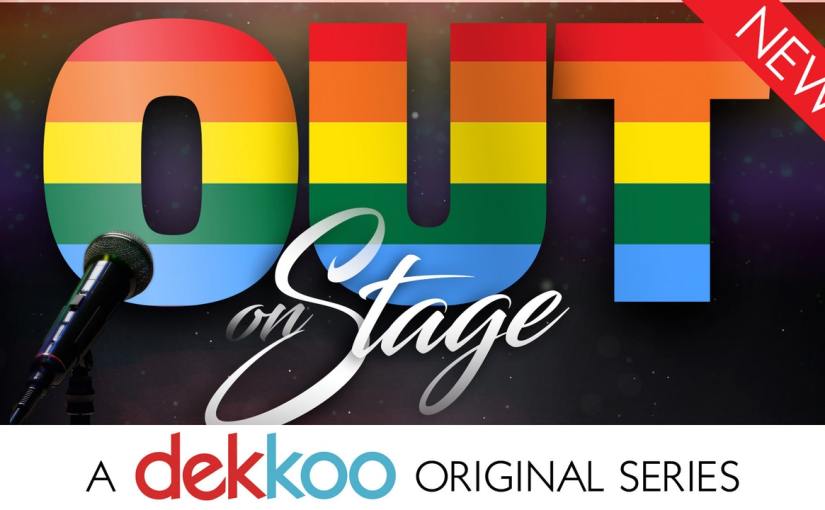 It’s no secret that straight, white males have dominated the stand-up comedy scene since its creation. Luckily for members of the LGBTQ community, there’s a new TV series dedicated to changing that. OUT on Stage: the Series showcases LGBT comedians breaking OUT of stand-up comedy’s status quo and presents to the world something groundbreaking that will make a place for queer comics in the stand-up comedy world for years and years to come.

After all, LGBTQ comedians aren’t exactly new. I mean, hello? Ellen Degeneres, Tig Notaro, Wanda Sykes, Lea DeLaria, and Jaffe Cohe n are only but a few of the many revered queer comics. The list goes on and on and hopefully will continue to grow as we move forward into the next decade and progress as people. But here’s what really sets OUT on Stage apart from the LGBT comedians before it: it’s queer comedy for queer people.

In the past, LGBTQ comedians performed for primarily straight, cisgender audiences which begs the question: were they truly being accepted or were they just the butt of the joke the whole time? In the world of stand-up comedy, most comedians will take whatever laughs they can get whether it’s at the expense of other people or even themselves, and queer comics are no exception. “I have built a career out of self-deprecating humor, and I don’t want to do that anymore… I put myself down in order to speak, in order to seek permission to speak, and I simply will not do that anymore, not to myself or anybody who identifies with me. If that means that my comedy career is over, then, so be it,” says queer comic, Hannah Gadsby, in her Netflix special, Nanette (2017). But what if this arena where self-deprecation is key to a queer comic’s success is based more on the heteronormative audience than the comic themselves? More to the point, maybe Gadsby’s notion of quitting stand-up comedy isn’t quite the right idea. Maybe all queer comedy needs is the right audience.

With that in mind, what makes OUT on Stage so great is that it doesn’t cater to a straight, cisgender audience, and actually supplies these queer comics with a primarily queer audience. It’s in this uncensored space where LGBTQ stand-up comedians can unabashedly thrive without fear of judgment or persecution, sharing their queer experiences with queer people. In fact, the key to this show’s magic is the experiences that both the audience and the comic share having lived the life of someone who identifies as queer. Whether intentionally or not, this series has given queer stand-up comedy the chance to truly come OUT of the closet and show off its big guns.

While OUT on Stage is a major step for queer-identifying people everywhere, there were also a few drawbacks (that—for the record—could be chalked up to these comics being used to catering to non-inclusive, patriarchal audiences in order to make headway in the stand-up comedy industry). The biggest flaw with the series was that it was incredibly male-centric (although it could also be argued that gay men haven’t had a chance to thrive in the comedy industry because straight men find them threatening to their ideas of manhood and that lesbians created a space because they’re deemed “non-threatening”). Lesbians Irene Tu, Janine Brito, A.B. Cassidy, and Gloria Bigelow showcased their talents on the show, but a more diverse group of LGBTQ comedians would have been even more revolutionary.

In fact, aside from the gays and lesbians, it seemed that the other letters of the acronym were particularly lacking. Seeing as we’re still fighting for trans rights to use the bathroom, maybe comedy isn’t yet quite a safe enough place for transgender people. And bisexuals, I’m sure, are clinging to the low-side of the Kinsey Scale in order to relate to their straight audiences. You can’t exactly blame the oppressed for playing the hand they’re dealt.

Another observation that was less than ideal was the reinforcement of some negative stereotypes amongst the community such as enforced “traditional” gender roles amongst same-sex partners, unsafe sex positivity, and fat shaming. Maybe this analysis is a bit too critical considering it is a stand-up comedy show where political correctness and progressive ideals are put on a slight pause. Regardless, OUT is innovative, and hopefully, we can look forward to the second season of OUT to break down some of these barriers.

At the end of the day, OUT on Stage is a great show for the LGBTQ community to finally get a taste of what comedy aimed at their own experiences is like. If you’re looking for some gut-wrenching laughs, OUT on Stage the series can be streamed on Dekkoo, a gay-centric streaming service. It’s what queer people deserve. One step for gays; a giant step for LGBTQ-kind everywhere.

Very special thanks to Austin for sharing! You can watch OUT on Stage now on Dekkoo.