Alright show of hands – who here has not watched ‘Boy Culture’? We won’t tell anyone, promise! Alright there seems to be a few of you out there. Why haven’t you watched it?? Are you afraid of the sexiness? Do you think it looks cheesy? We promise it’s not as cheesy as you think it is. Well I mean it is, but I promise there’s more to it! Just keep reading.

‘Boy Culture‘ follows the adventures of a witty and droll prostitute named ‘X’. Through voice-over he takes us through his philosophies on hooking, dating in the gay world, and introducing us to his smoking hot roommates; the mega-twinky Joey with the large tongue and the possible-love-of-X’s-life Andrew (played by the always-charming Darryl Stephens). Conflict comes into play when X reveals that even though he’s in love with Andrew he can’t actually imagine having sex without getting paid. Luckily X has a new older client that seems to be good at playing the role of therapist. Enter Gregory, (played by Patrick Bauchau, a veteran actor best known for ‘A View to Kill’, but who I know best from ‘Phenomena’ which I actually watched last night coincidentally) a recluse who seems to only want to talk and not actually have sex.

Alright so what value does this movie that seems to be just another gay prostitute film contain? Well the answer is the incredibly witty, fun, and honest dialog penned by Q. Allan Brocka (‘Eating Out‘, ‘Rick & Steve’) who once again is able make a low-budget film shine through dialog that ranges from the brilliantly cheesy to really heartfelt lines that get me aww’ing every time, ‘But lesbians have it easy. Sure they have all that dyke drama, but it’s only because they give a shit about each other’.

Watch it with: Lots o’ friends or that trick you brought home.

Mix it with: Apple Martinis 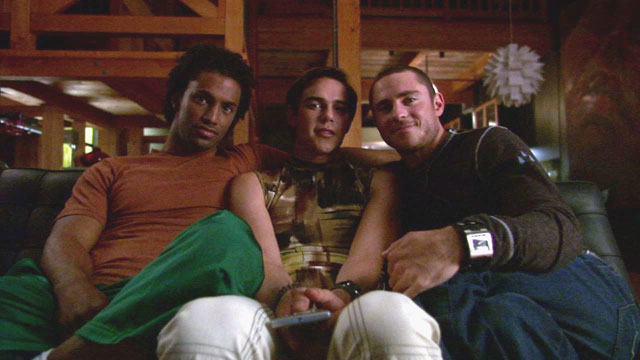