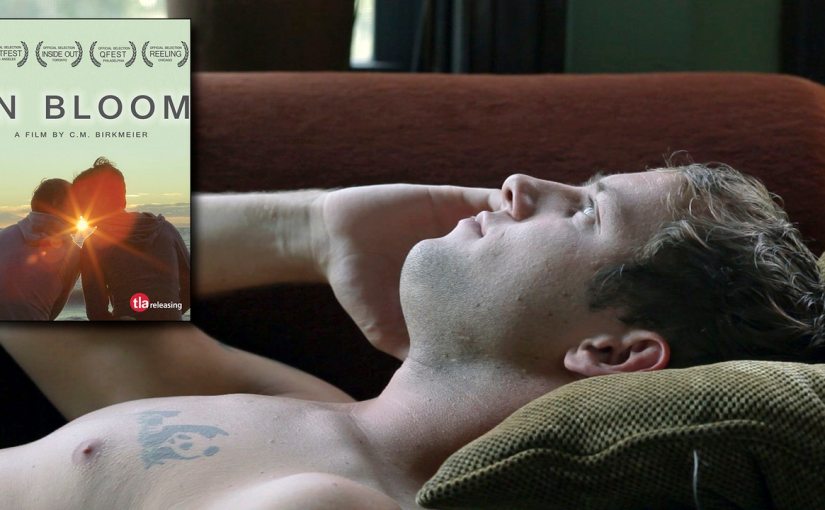 Love is always best in the early stages when it’s ‘In Bloom‘. Chris Michael Birkmeier’s first feature film captures the innocence and tragedy of first love with a delicate touch reminiscent of Andrew Haigh’s ‘Weekend’. Although whereas ‘Weekend’ features leads from the UK that you can barely understand, ‘In Bloom‘ takes place in Chicago with super cute clean-cut American boys that definitely speak our language 😉

As the film opens we’re introduced to Kurt and Paul who after running into each other awkwardly at a party try to be amiable with each other until… flashback! :SEVEN MONTHS EARLIER: A much more carefree Kurt smokes a joint in his bedroom while a frazzled Paul stocks shelves in bland looking grocery store. They’re a couple still in the early stages of love where they live separately, but spend all their time together. They go to the beach and play the ‘which guy is the hottest’ game, they have hot sex, and they go to parties together. We quickly find out the reason why Paul’s working hard and Kurt isn’t is because Kurt sells weed. Which isn’t to say selling weed isn’t hard work, but… it just isn’t.

Kurt and Paul’s relationship is tested by the arrival of Kevin, a new client/customer of Kurt’s. A wildly cute young-and-carefree type he definitely is someone that Paul could never be – younger, cuter, and a non-paranoid stoner. We can tell immediately that Kurt is trying his best not to be unfaithful to Paul, but it’s hard when Kevin is the one to make the first move and kiss Kurt. Gasp!! Of course this throws Kurt into a realm of uncertainty about Paul if he’s his one true love. Is he supposed to commit to this person if he’s interested in someone else? If only he didn’t smoke so much weed… Paul also is going through his own issues. “Don’t you get tired of doing the same thing over and over?” He wants to go to Paris and explore. Kurt just wants to ‘chill’ and have sex.

When I first saw this film I was really taken aback by its honesty and its emotional connection that I could completely relate to. I was lucky enough to meet the filmmakers at their screening at Outfest and was thrilled to meet a group of people who were just like the film they created – smart, in touch with the gay community, and eager to make more films. The director has cited most of the film coming from his own life experiences and it totally shows. Here’s to hoping he creates more feature films – in the meantime he’s been busy creating queer music videos in Los Angeles.

Watch it with: An ex you’re friendly with.

Mix it with: Beer and weed!