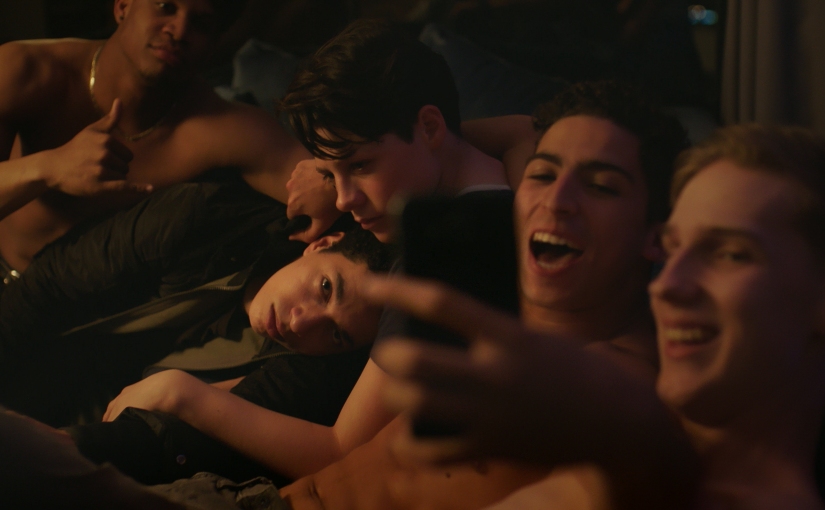 After weeks of few jobs and low revenue, Kamal accepts a call from Jacob (Tobias Nierop). Hatim soon begins to feel an attraction towards Jacob, and what once was simply business now has become so much more. Hatim must now try to escape his world of blackmail and danger while trying to pursue a budding relationship with Jacob.

Khata never shies away from showing the gritty details of male prostitution. The audience is forced to bear witness to violence, drug use, and a particularly violent depiction of sexual assault. The film lays everything bare and forces it’s audience to confront the sometimes violent word of sex work head on.

Khata is streaming on Dekkoo now.

After years in hiding and struggling to control his demons, an eccentric drifter returns home and discovers that his childhood abuser, the center of his pain, is still alive. Armed with this knowledge, the drifter plots his revenge, all the while navigating the perilous land of masculine fragility in modern-day America. ‘Discreet’ is available now to stream on Dekkoo!

The charming portrait of legendary fashion designer Manolo Blahnik and how his extraordinary dedication to his craft led him to become the world’s most famous luxury shoemaker. Watch ‘Manolo: The Boy Who Made Shoes For Lizards’ on Dekkoo now!

While grieving the loss of his partner, Eliot decides to conspire with dark forces. He unknowingly unleashes a mysterious evil that connects him to a stranger. Stream the first season of ‘Soul Mate’ now, exclusively on Dekkoo!

When bible humpers Perry and Tiff Myers endeavor to out their friendly gay roommates, Tanner and Derek, as malevolent specters from the hellish great beyond, it is Perry and Tiff that might just be revealed as hauntingly homophobic instead. Dekkoo Films presents ‘Poltergays’.

Pressured to satisfy his girlfriend’s desires, an anxious young man begins to struggle with both his sexuality and his sanity after meeting the insidious new boy who has moved into his childhood home. ‘Rapture In Blue’ is available now on Dekkoo!

Still reeling from a recent break-up, Jamie, a cabaret singer, decides to angrily shut out the rest of the world and start living only for himself. When he meets Ben, the lonely younger poet who lives next door, the two embark on a tentative romance that may end up healing both of their hardened souls. Watch ‘Getting It’ now on Dekkoo!

Coming next week – The past is hard to forgive.

Mark (writer-director Mark Blane), the protagonist and anti-hero of the new dark comedy Cubby, is a misanthropic 26-year-old gay man who has been living in his mother’s garage in Indiana. An illustrator who works almost exclusively on sexually explicit-and BDSM-themed-artwork, Mark is stuck in a state of arrested development. He’s pretty much the last person you would expect to find a job working with children… but that’s exactly what happens. When he lies about getting a job opportunity in New York City, he ends up taking a rel job babysitting for 6-year-old Milo (Joseph Seuffert), a new best friend who fully accepts Mark, but does little to help him meet the challenges of everyday life.

Falling behind on rent, and running out of anti-anxiety pills, Mark finally discovers the inspiration he needs, in the form of an imaginary-friend-superhero named Leather-Man (Christian Patrick), who appears to him with the help of a psychedelic cupcake. As a sexy metaphor for discipline and control, Leather-Man helps Mark onto the path for success, but not before Mark’s babysitting adventures turn from empowering, to risky and ultimately transformative.

Featuring a sensational supporting performance from Patricia Richardson (Home Improvement), Cubby is a demented, yet completely charming comedy that marks the arrival of an original new cinematic voice in writer-director-star Mark Blane.

Watch the trailer for Cubby below. The film is now available on Dekkoo.

In this funny, bittersweet romantic comedy from Sweden, perpetual list-maker Anton falls in love with David, but things start to go awry when Anton realizes that his dreams in life might be in direct opposition to David’s. ‘Top 3’ is now available on Dekkoo!

Nathan, a conservative English teacher, tells his best friend Zach about a one-night stand with a hot Latin man who loves to talk dirty in this short comedy. Watch ‘Dirty Talk’ now on Dekkoo!

Over the course of forty-eight hours during a music festival, a recovering drug addict attempts to rekindle his relationship; but with little money, he is forced to engage in a dangerous deal with a former lover-turned-drug-pusher to fund the weekend. Stream ‘The Low End’ on Dekkoo!

Get Out meets Grindr in The Skin of the Teeth, a sinister new drama-thriller from writer-director Matthew Wollin, who evokes the feel of a contemporary film noir.

When Josef (Pascal Arquimedes) arrives at John’s (Donal Brophy) apartment for a date, their prickly energy slowly gives way to an unusual and genuine chemistry. But after Josef swallows a pill with unclear effects, the night starts to take a shocking turn.

Josef is suddenly plunged into a surreal world where he is forced into a literal and figurative interrogation of just who and what he is.

While evoking the surreal work of David Lynch, this wild new film examines race, sex, love and identity in a mind-bending way – and the lead performance will keep you holding your breath from beginning to end.

The Skin of the Teeth is now available on Dekkoo. Check out the trailer below. 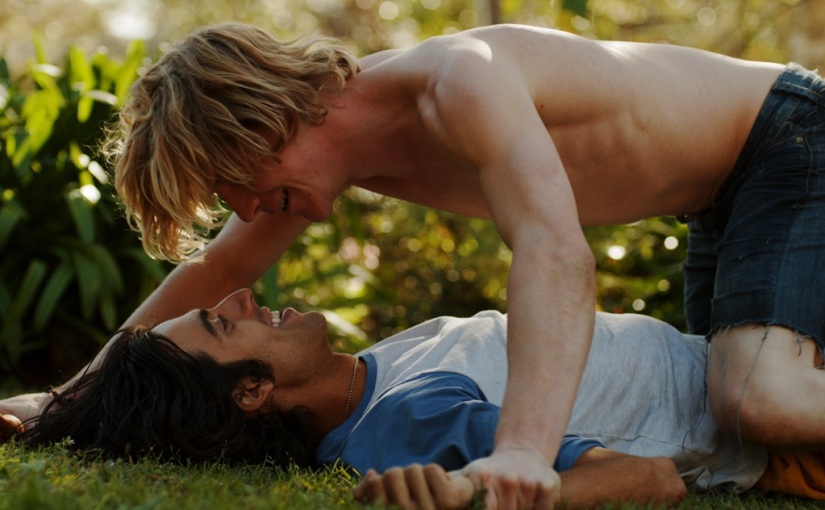 The scars of our youth shape the adults we become. 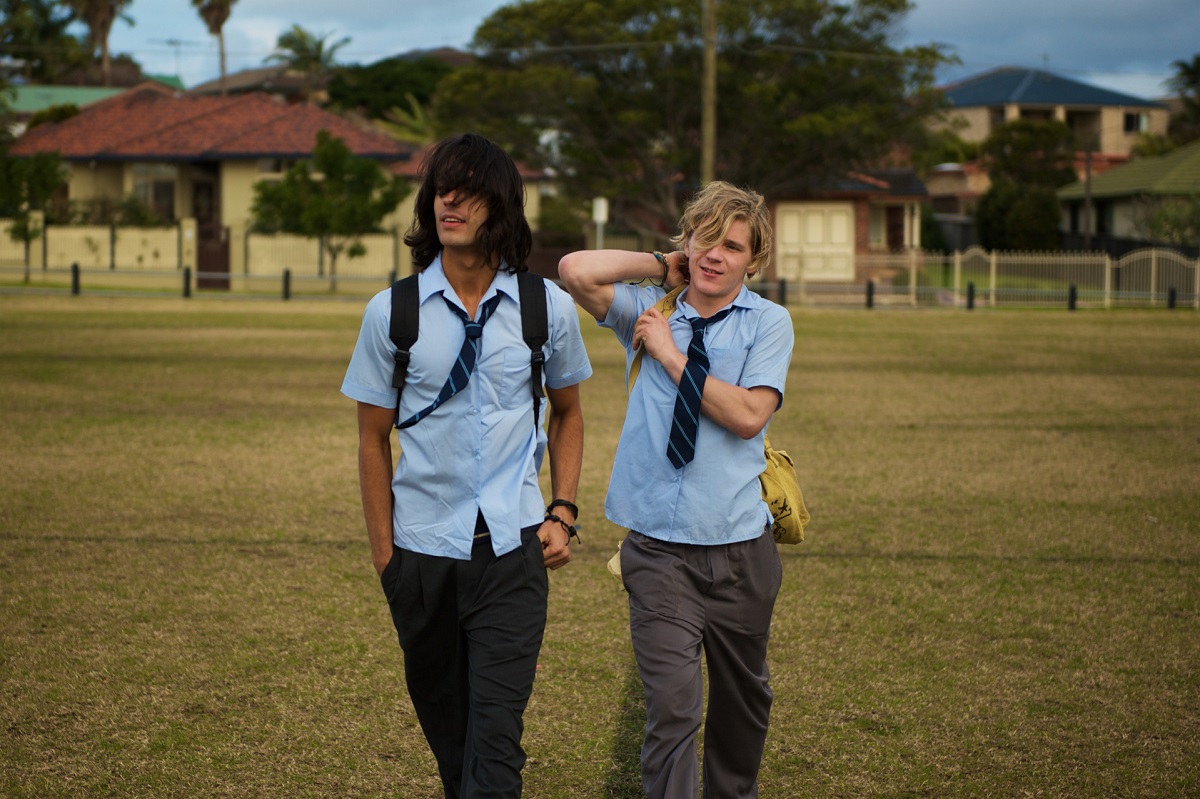 In the riveting Australian drama Teenage Kicks, angst-ridden seventeen-year-old Miklos (Miles Szanto) makes plans to escape his migrant family and run away with his best friend and secret crush Dan (cutie-pie Daniel Webber, hot off his star-making turn as Lee Harvey Oswald in the miniseries “11.22.63” and his regular role on “The Punisher”).

Miklos’s dreams are dashed after the accidental death of his older brother Tomi (Nadim Kobeissi). Only he knows the events that led to this tragedy. Suddenly, he is forced to navigate his guilt, as well as his explosive sexuality, in order to find the man he will become.

Written and directed by Craig Boreham, who recently made MTV’s list of “hot filmmakers to watch,” Teenage Kicks is a smart and sexy drama that has earned rave reviews around the globe. Empire magazine labeled it “a debut not to be missed.” 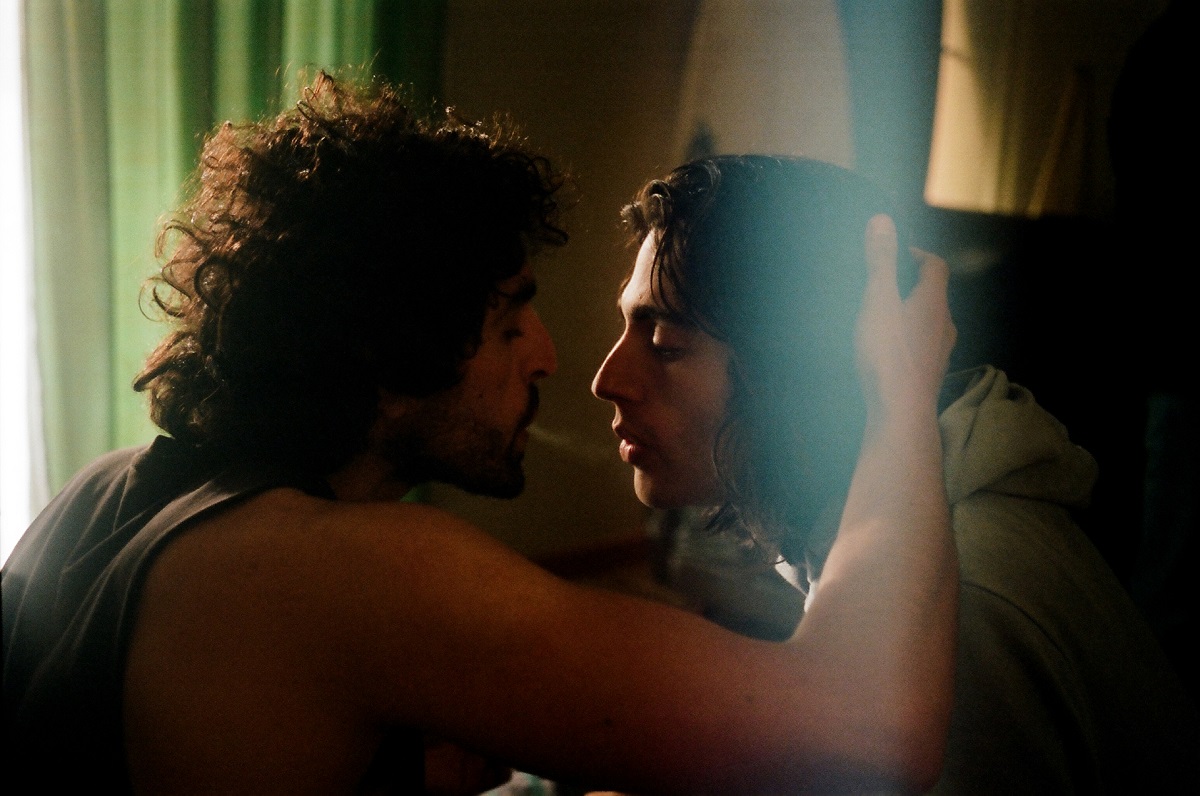 Off Beat follows 26-year-old Lukas (Hans-Jakob Mühlethaler), who is not so much living as floating.

His dream of making it as a musician is on the wane and his great passion – freestyle hip-hop – has also past its heyday. Lukas lives with his producer, 46-year-old Mischa (Domenico Pecoraio), in an old loft where they cultivate cannabis. They have been having a turbulent affair for years – but this is a closely guarded secret.

Lukas has grown cold inside and only really feels himself in moments of excess. Drunk and coked-up to the eyeballs, he toils his way through a gig in a small club. In the audience his sixteen-year-old brother Sämi (Manuel Neuburger), an ambitious rapper himself, feels nothing but shame for his brother’s embarrassing performance.

Mischa decides that he has had enough of Lukas’ escapades and suggests they ask Sämi to join the band. Sensing that he is about to be substituted, Lukas gets out of his head and starts to take back control of his life. 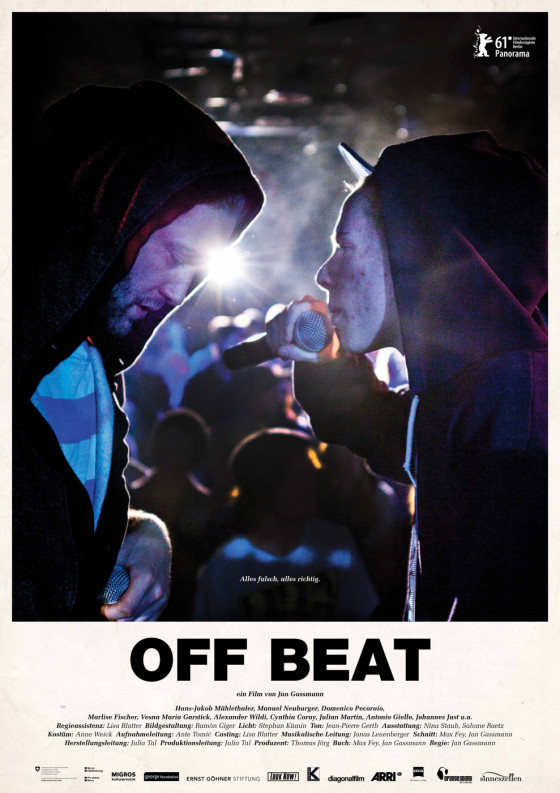 A gritty drama that shines a spotlight on a corner of closeted gay life not often seen on film, Swiss writer-director Jan Gassmann’s Off Beat is now streaming on Dekkoo. Check out the trailer below.