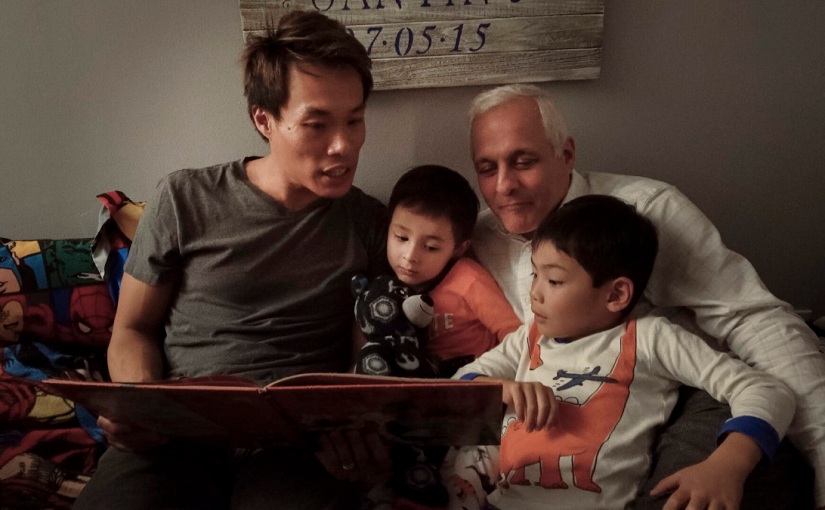 A new documentary from award-winning Swiss director Daniela Ambrosoli, Papa & Dada shows what it means to raise children as a gay couple.

Four same-sex couples, including the famous ballet dancer John Lam and his husband John Ruggieri, talk about of the tough challenges and inspiring joys they experienced along to road to becoming a family.

The film paints a loving portrait of ordinary family life, showing how two fathers experience the same worries, hardships, joys and challenges as straight couples. The unconditional love shown to the children runs like a thread through the film – unobtrusive, but always present.

Funny, touching and inspiring, the film ultimately aims to prove that sexual orientation has nothing to do with raising a child. Being a parent simply means giving love. Period.

Watch the trailer for Papa & Dada below. The film is now available on Dekkoo.

Iman Niknam stars in the film as a trash collector who lives in a small trailer at the top of a hill. At first glance, his may seem like a lonely existence. However, he has the company of his dog and his lover… who just happens to be a mannequin.

When he learns that the Iranian government is conducting an important nation-wide census, he becomes determined to add his mannequin lover as a properly recognized citizen.

Funny and surprisingly heartfelt, And Just Two More comes from writer-director Ali Reza Mohammadi Rouzbahani, an up-and-coming filmmaker with style to spare who has recently earned acclaim on the international film festival circuit for his feature length debut Singo.

In Shall I Compare You to a Summer’s Day?, a contemporary queer musical and pseudo-documentary from Egyptian director Mohammad Shawky Hassan, soft speaking voices and a dreamlike soundscape of Egyptian pop music combine to create an almost hallucinatory cinematic experience.

Based on a diary of the filmmaker’s personal love stories, and told in the form of tales from “One Thousand and One Nights,” Shall I Compare You to a Summer’s Day? gives us a glimpse into the sensual experiences of gay Egyptian men.

Telling their stories with humor, tenderness and wit, the power of prose commands attention and allows viewers to be completely swept up in Hassan’s unique vision.

With gorgeous colors, riveting stories, handsome actors and imaginative editing, Shall I Compare You To a Summer’s Day? is a truly unique gay fantasia.

Watch the trailer for Shall I Compare You to a Summer’s Day? below. The film is now available on Dekkoo.

In Present Perfect, his 2017 feature film debut, Thai director Aam Anusorn Soisa-Ngim drew from his own experiences to tell the story of Toey and Oat, a pair of young men who, despite the fact that they both have girlfriends, end up falling into a brief affair during a trip to a small Japanese town.

The film developed a dedicated fanbase in Japan, leading to a successful crowd-funding campaign for this new, highly anticipated sequel. Set four years after the events of the first film, Present Still Perfect reunites the two young lovers – this time on a tropical Thai island.

Oat is now a married man with a son, but Toey has never forgotten their brief romance and won’t give it up so easily.

Tender and heartfelt, the film offers an idealistic view of same-sex relationships in modern day Thailand.

If you could go back in time and change one of your life’s biggest regrets, would you? Could you? More importantly, should you?

The binge-worthy new series Trending Yesterday explores that very question. This independently-produced show follows a close-knit group of gay men who have all been friends since the late 1980s. Though they came of age during a more turbulent time, the group built a strong sense of community and survived society’s ups-and-downs together.

The series begins in the present day, but takes an unexpected turn when, after a celebratory night, Eric, the show’s narrator, wakes up to discover that he has somehow been transported back to 1988. He then sets out on a mission to change the things he wasn’t able to the first time around.

Employing a dual timeline, this clever, critically-acclaimed series examines the many strides we have made over the past three decades as well as the challenges that still exist within the LGBTQ community.

All eight episodes of the first season of Trending Yesterday are now available on Dekkoo!

Wilma tells the story of an unusual meeting between an estranged father and his precocious child.

Wilma is a young kid who goes to meet her dad for the very first time at the trailer park where he lives. What the dad doesn’t know, however, is that the son he once fathered now identifies as a girl and has changed her name.

A touching and funny 11-minute short film from Icelandic writer-director Haukur Bjorgvinsson, an accomplished artist who has worked mostly as a sound designer in commercials and music videos, Wilma earned massive acclaim at film festivals all around the world.

The film won the Special Jury Prize at the 2020 Flickerfest in Sydney, the Audience Award at the 2019 Luststeifen Film Festival and the Best Original Screenplay Award at the 2019 Face á Face Festival in France. It was also nominated for Best Short Film at the Icelandic Film and Television Awards. In fact, this short film has been so successful that Bjorgvinsson is currently working on a feature-length adaptation.

Wilma is available now on Dekkoo.

From Romanian writer-director Dan Chisu, 5 Minutes Too Late is a gripping drama based on true events.

A cinema in Bucharest screening a controversial film about a lesbian couple becomes the epicenter of a radical, far-right, anti-gay protest. During the incident, a young man is physically attacked and brought to the hospital in a coma.

Complicating matters are inconsistencies in the police reports, in which they claim the attack on the young man took place before their arrival. The accuracy of their claim is called into question when security footage shows the ambulance arriving after the police, and leaked footage belonging to a bystander reveals the captain making homophobic comments to one of the anti-gay protesters.

A battle over competing narratives ensues between the stubborn, arrogant captain and an equally stubborn, idealistic investigative reporter who is just looking to unveil the truth.

As each party attempts to gain the upper hand over the public narrative, the officer and the reporter engage in questionable tactics in an effort to thwart each other. Meanwhile, a young man clinging to life becomes increasingly forgotten amid their political struggle.

Watch the trailer for 5 Minutes Too Late below. The film is now available on Dekkoo.

Taking place in two alternating time periods – the 1970s and modern day – You Are My Sunshine follows long-term partners Tom and Joe (played as younger men by Steve Salt and Jack Knight and as older men by Ernest Vernon and Charles O’Neill).

Joe, a shy young man living with his conservative father and his sister in Britain, meets the playful and charismatic Tom through work in the 1970s. There is an instant connection between the two young men. Tom’s confident personality helps Joe to come out of his shell. Meanwhile, the sudden visibility of queer rights activists starts to disturb Joe’s family. Even in the present day, though Joe and Tom have been together for decades, Joe’s sister still harbors major resentments when it comes to her brother’s sexuality.

As the younger versions of Joe and Tom worry about their love being discovered, the older versions are dealing with health issues and family strife. Through two powerful characters, writer-director David Hastings offers a message of how love and acceptance can change even the hardest of hearts.

Watch the trailer for You Are My Sunshine below. The film is now available on Dekkoo.

Originally released in 2009, Dare is a romantic teen drama from director Adam Salky, based on his own acclaimed 2005 short film of the same name. Featuring an all-star cast, the film tells a captivating story about a group of high school seniors at the crossroads of their adult lives.

When a pompous young actor tells so-called “good girl” Alexa (Emmy Rossum) that she hasn’t really lived, she embarks on a bold journey that takes her into the arms of a mysterious bad boy Johnny (Zach Gilford). Envious, her shy best friend Ben (Ashley Springer) also dares to pursue Johnny, complicating Alexa’s romance and pushing the sexual and romantic boundaries among the three friends.

A critical hit at the time of its release, Newsday called Dare “one of the smartest and most honest teen movies in years.” The New York Times said the film is “at once more provocative and more contemplative than most of its big-screen counterparts.”

Watch the trailer for Dare below. The film is now available on Dekkoo.

From French filmmaker Philippe Faucon, the award-winning director behind Fatima, this amazing new three-part cinematic event takes us through each of these years.

Proud tells the stories of Charles (Frédéric Pierrot), Victor (Samuel Theis) and Diego (Julien Lopez), three generations of men, all from the same family, who represent the seismic social changes that took place within the LGBTQ community over the course of just three decades.

A three-part episodic cinema event, Proud offers up a chronology of tolerance and a portrait of one family through changing times. Cahiers du Cinema called it “one of the most exciting series of the year.” Le Parisien called it “A series that defends the fundamental rights of gay people.”

Watch the trailer for Proud below. All three installments are available now on Dekkoo.