When handsome and charismatic Pablo arrives at his affluent family’s house, everyone is eagerly awaiting the return of their beloved son, devoted father and caring husband. A seemingly exemplary pillar of Guatemala City’s Evangelical Christian community, Pablo’s announcement that he intends to leave his wife for another man sends shock waves through the family. ‘Tremors’ is available now to stream on Dekkoo!

Fifty conversations exploring the many different shades of being “gay” in America. A conversation on the degrees and varying perceptions about how people define themselves. Stream ‘Between the Shades’ now on Dekkoo!

David (David Schachter), a naive graduate student, has volunteered to work as a ‘buddy’ for people dying of AIDS. Assigned to the intensely political Robert (Geoff Edholm), a lifelong activist whose friends and family have abandoned him following his diagnosis, the two men, each with notably different world views, soon discover common bonds, as David’s inner activist awakens and Robert’s need for emotional release is fulfilled.

The first narrative feature film made about the AIDS crisis, acclaimed independent filmmaker Arthur Bressan Jr’s (Passing Strangers, Abuse) Buddies is an intensely personal study of love, death, and the need for activism during the earliest years of the LGBTQ community’s fight for survival.

Structured like a filmed play, Buddies turned out to be Bressan’s final film, as he too would fall victim to AIDS barely two years after its completion.

Nearly impossible to see following its brief theatrical release and never officially released on home video, Buddies is available now on Dekkoo, newly restored from a long-lost 16mm negative. You can watch the original 1985 trailer below.

In this poignant gay cinema classic, the first film to deal with the AIDS epidemic, a New York City gay man in a monogamous relationship becomes a “buddy” or a volunteer friend to another gay man dying of AIDS. Director by Arthur J. Bressan Jr. died of complications from AIDS two years after the film was released. ‘Buddies’ is available to stream on Dekkoo!

A former high school track athlete’s distorted views on love, negatively affects the people closest to him. Watch season 1 and season 2 of ‘Cheetah in August’ now on Dekkoo!

Dave and Andrew reach a new level of closeness in their relationship when they share their personal experiences with self-harm. ‘Vertical Lines’ is now available on Dekkoo!

This intimate film reveals the legendary man with the white saran wrapped pants, undersized leather vests, and Dutch-boy haircut who is the iconic Peter Berlin. Watch ‘That Man: Peter Berlin’ now on Dekkoo!

Charlie’s a mess. His best friend’s not talking to him, he can’t concentrate on his work…and now the clock’s ticking on his french exam. But the courage to speak can come from the most unlikely places. Stream ‘The Language of Love’ now on Dekkoo!

‘I’m Coming’ is a comedy short film which explores the dangers (or advantages) of online dating. Everything is good until something goes wrong, and then what’s more important, the truth or your reputation?

Coming next week: Darryl Stephens plays Pete Logsdon-just a guy in Philadelphia who happens to have a history of getting involved with married men. 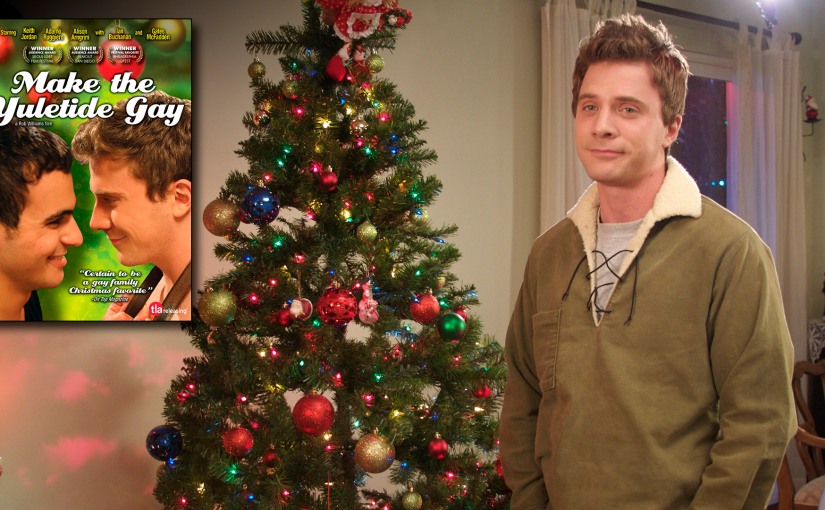 College senior, Olaf ‘Gunn’ Gunnunderson (Keith Jordan) is head-over-heels in love with his ultra-gay sweetheart Nathan Stanford (Adamo Ruggiero). Though they don’t want to part ways, the boyfriends are each headed off for Christmas break, returning home to their families.

Nathan’s cold parents won a trip to Israel, but somehow “forgot” to tell their son. When he hears that he’s to spend the holidays alone, he decides to make his way to Wisconsin to be with his sweetie and family. When he gets there, there are a few surprises: Gunn is in the closet; Gunn’s mom, Anya is a major Christmas freak who says “Dontcha” frequently; and Gunn takes after his dad Sven – anatomically speaking – a fact learned when Gunn’s stoner dad greets Nathan at the door in an open bathrobe.

With constant double-entendres flying from Anya’s mouth and Gunn Sr. always stoned, no one seems to notice that Gunn is gay and dating Nathan. With the closet walls closing in on Nathan, he decides to flee back to his empty home – the Gunnunderson’s are a little too insane even for him!

Giddily exuberant, this gay holiday classic from writer-director Rob Williams’ is romantic and filled with laugh-out-loud jokes. Make the Yuletide Gay is guaranteed to get you into the holiday spirit.

Watch the trailer for Make the Yuletide Gay below. The film is now available on Dekkoo.

Originally released in 1998, The Wolves of Kromer is a dark, funny fairy tale of darkly sexy gay werewolves, murderous old ladies and an old English town bent on getting rid of those not like themselves.

The story centers around the goings-on of two couples: Seth and Gabriel (Lee Williams and James Layton), a pair of werewolves who live outside the quaint village of Kromer and two tottering old women who share a secret. Young Seth, thrown out of his house after coming out as wolf, meets up with the worldlier Gabriel who, attracted to his fair face and bushy tail, takes him under his wing. They spend their nights foraging for food by the lake outside the village of Kromer, hanging out with other wolves, playfully terrorizing the townsfolk and eventually falling in love with each other.

All the while in the town, the seemingly harmless old house servants – the scheming Fanny (Rita Davies) and her daffy accomplice Doreen (Margaret Towner) – plot to knock off their mistress Mrs. Drax (Rosemarie Dunham) and direct blame on the wolves.

Tensions between the nocturnal animals and the hypocritical townsfolk come to a head as the town’s fire-and-brimstone preacher riles everyone up against the ostracized wolves.

Filled with tender romanticism, social satire and laugh-out-loud comedy, this modern-day gay parable is a delight from beginning to end. Also, quite notably, it’s narrated by Boy George!

The Wolves of Kromer is streaming now on Dekkoo.

In the small English village of Kromer, the local residents are angered by the wild parties held by the promiscuous ‘wolves’ who dwell on the edge of town. When a woman is killed by her servants, they manage to put the blame on the wolves, who soon find themselves hunted by an angry mob. Watch ‘The Wolves of Kromer’ now on Dekkoo!

For voice over artist Daniel, life in London is one long ride of demanding client calls and awkward Grindr meets, but when his mother visits from the US, he is forced to re-evaluate how authentically he is living his life. ‘Clothes & Blow’ is available to stream now on Dekkoo!

This documentary explores the daily life of a woman who provides shelter for those rejected by family and society. At her home she welcomes her friends within the LGBT community and provides them with a safe place away from persecution. ‘Upon the Shadow’ is available to stream now on Dekkoo!

‘The Blue Hour’ is a sexy supernatural love story about a bullied loner, Tam, who finds solace in the arms of Phum, a boy he meets at a haunted swimming pool. Stream it now on Dekkoo!

This edgy drama follows 19-year-old Ari, a gay Greek-Australian whose roiling ethnic- and sexual-identity struggles lead to a wild, 24-hour odyssey. Watch ‘Head On’ on Dekkoo!

In the third and final season of the Dekkoo-original series, Nate has at last put Joey behind him and moves forward in his career and friendships. That is, until an opportunity presents itself that makes him question everything he knows about L.A. All the while Jeff, Andy, Nicole and Mick navigate what it is they want and need in order to finally feel…fine.

The new season of ‘I’m Fine’ is available to binge-watch now!

Two men meet for a passionate sexual encounter that ends up getting far more personal than either had imagined. Tackling issues of self-image, the prescribed sexual roles of gay men and notions of masculinity, this short film shows what happens when two attractive young guys cut through all the sexual tension and really start getting intimate. Dekkoo Films presents ‘Rubber Dolphin’.

‘The Pink Angels’ is an outlaw-biker movie from 1971 about a gang of gay bikers on their way to a ball to compete as drag queens. B-movie gold and, considering it was released in the early 70’s, treats its LGBTQ+ characters with respect.

Pour yourself a milkshake and experience the magic, music, and mirth of the all-time favorite camp-tastic classic: ‘Can’t Stop the Music!’ This (highly fictionalized) story depicting the creation of disco icons The Village People provides the framework for an outrageous musical extravaganza as only producer Allan Carr (Grease, Grease 2) could deliver. Stream ‘Can’t Stop the Music’ now on Dekkoo!

A chance meeting changing attitudes and lives. With a hint of Woody Allen in style and feel. A simple story of 2 strangers brought together by a dog. It delves into the ideas of solitude and loneliness and how a simple human act of kindness can instill hope. ‘The Definition of Lonely’ is available now on Dekkoo!

Coming next week: The second season of ‘Woke’!