HIV is the shadow that seems to lurk behind all gay men. Due to poor sex education in schools that all but ignore homosexual safe-sex practices, a lack of openness with parents in talking about sex to their queer youths, and other various reasons, HIV continues to be prevalent among gay men. According to a study the Centers for Disease Control and Prevention ran in 2017, 66% of people with HIV obtained it from male-to-male sexual contact. For the younger generations who didn’t experience the onset of the AIDS epidemic firsthand, there’s often an attitude of “that couldn’t happen to me.” That is, until there’s a scare, and they end up in a doctor’s office waiting for the results of their antibody test.

This is the very scenario shown in Writhing, a beautiful short film that mixes contemporary dance and ethereal narrative to convey the agonizing feeling after your finger is pricked. Director and writer, Robert John Torres, has created a stunning and meaningful work of art that perfectly encapsulates the experience many gay men know all too well. The beauty of this film lies in the contrast between Everett (the main character) as he goes in to get the HIV test and the Red Man that twists and writhes in haunting shots that evoke feelings of pain and turmoil.

It seems that Torres’ concept of sporadic contemporary dance symbolizes both the gut-churning anticipation of waiting to find out your HIV status and the disease itself. The Red Man is painted head to toe in red and adorned with leather restraints including a mask, juxtaposing HIV and all of the stigma, fear, and tolls it takes on its bearer with the physical act of dancing. 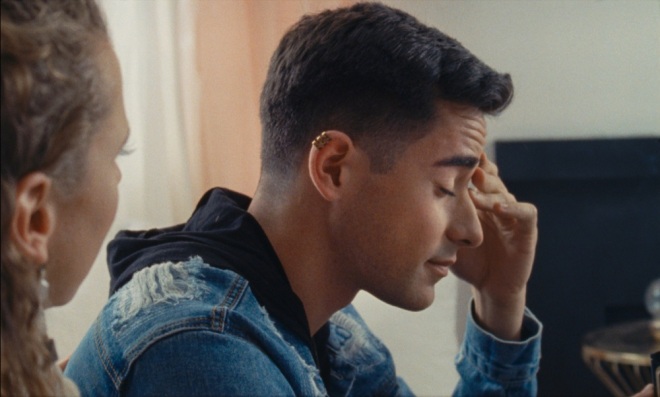 For the majority of the short film, we see the dancer in a bed as Everett has quiet moments of fearful contemplation. The Red Man appears more and more as the film continues, the climax of his role appearing when Everett is sharing his fears with the counselor administering the test. It’s at this point when the Red Man is showcased in a strobing double-exposure where he looks as if he’s being tortured. It isn’t until the counselor gives Everett some kind words of support that the red figure is seen outside, dancing with more grace than we’ve previously seen and breaking free from his symbolic ties to the bed.

This short film is a mesmerizing foray into one man’s journey that dips in and out of reality, and we couldn’t recommend it more. You can view Writhing right here on Dekkoo, available for streaming now.