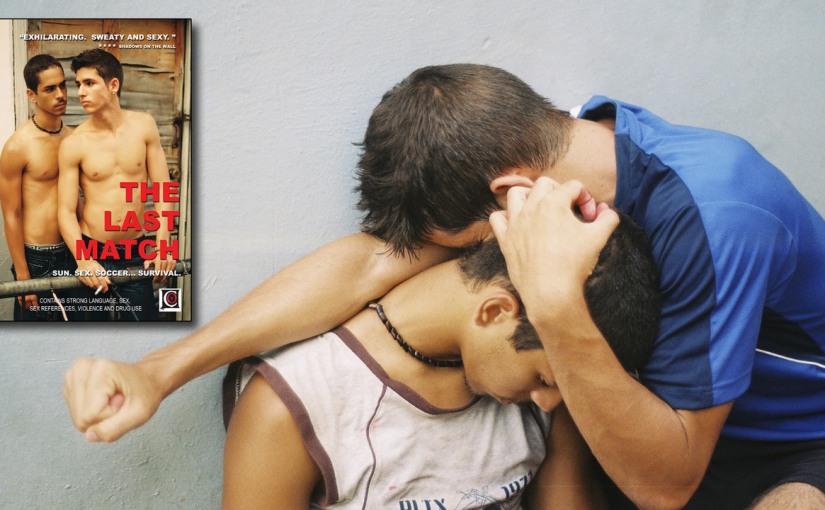 Being gay in many parts of the world is still hard. Much harder than the glossy world of shows like ‘Glee’ would lead many to believe. In some countries and cultures it’s still all about being discreet and being smart about how you go about your ‘business’. Antonio Hens takes us into that world in Cuba, a country that’s seeming to get a new breath of life with trade relations being re-established with the United States.

After ‘Doors Cut Down‘ and ‘Clandestinos‘ (both of which are also on Dekkoo) Antonio continues to probe the world of machismo homosexuality in ‘The Last Match‘. However, this time in Cuba, in the steamy world of male locker rooms and gambling halls. Both of the main characters in this story have female partners; Yosvani has a fiancee who he seems very hesitant to have sex with. Renier straddles the worlds of life with his wife and child and the arena of hustling where he meets rich men who seem to fall in love with his chiseled handsome features and promise him the world. The two handsome men eventually meet and a downward spiral of sex and violence ensues.

Reasons for watching this film are numerous. If the fact that these super sexy guys aren’t enough then you should at least watch it for its extremely interesting commentary on modern life in Cuba which should be an academic reason for you to watch said sexy guys getting it on. Also there’s a crazy mother-in-law that’s so bat-shit crazy you’ll fall in love.

Watch it with: Your best friend that you know has latin
fever!

Mix it with: A Daiquiri or a Mojito