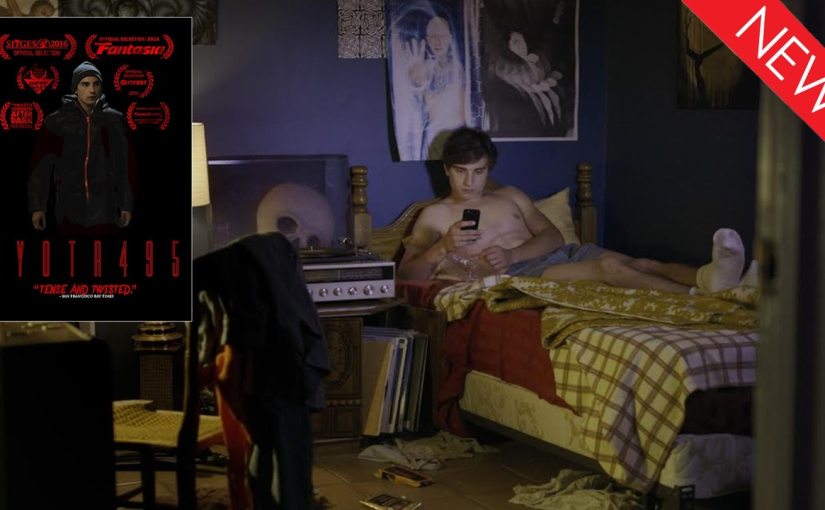 How was everyone’s Halloween festivities last night? Did you have to take the day off work to recover? Over here at Dekkoo we’re still clinging onto the vapors of October with this week’s short film that really packs a wallop: ‘Pyotr495‘.

The beginning of ‘Pyotr’ starts out simple enough, a really really cute guy named Pyotr (played by Alex Ozerov) is cruising on Grindr one night and is invited over to an older muscle stud’s apartment (decorated in terrible/amazing Russian fashion), but since this is a horror film he of course runs into some trouble, namely a few anti-gay Russian Nationalists that believe that it’s their responsibility to rid Russia of ‘degenerates’ like the gays. A twist towards the end makes the short film extremely enjoyable 😉

There are lots of reasons why this short film has played all over the world: great direction, fantastic cinematography, a great horror twist, and a really cute lead to name more than a few, but it’s the films social commentary about LGBTQ bullying that really ties everything together. The films starts with a message, stylized like the beginning of a Disney fairy tale: “Russia, 2014 – The country’s military has been ordered to invade the Ukrainian territory of Crimea, while the newly-instated LGBT Propaganda Law makes it illegal to present gay life in Russia as normal. President Vladamir Putin’s approval rating is at a six-year high.”

This film paints a reality for many LGBTQ people living in Russia. They don’t feel safe in the same spaces that most of us in the U.S. feel safe in. The wrong hookup can lead to devastating consequences. Charlie David from Border2Border (who helped bring Pyotr to a wider audience online) interviewed the director Blake Mawson and asked a question about why the film is so important in this day and age:

With what we’ve seen is happening in Chechnya with the anti-gay purge and concentration camps for gay men, these human rights abuses by Chechen authorities where journalists covering the story are receiving death threats and being forced to flee the country – this is obviously a very clear sign that things are not getting any better and are in fact worsening in many parts of the globe. While I’m not claiming that our short film is solving any of world problems, I do think it is important that we use our voice as artists and as people in any way possible to draw attention to these injustices and continue to raise awareness.

I think if I can use genre-type film to put an audience in the shoes of the people who are experiencing this type of terror and hatred, make them uncomfortable and have them realize that this is actually not so make-believe in the end, that this type of horror is real – then we can begin to open people’s eyes and reach an audience in unexpected ways.

Check out ‘Pyotr495‘ tonight and do your part in kicking the asses of Russian bigots!!

Watch it with: Your horror buddies.

Mix it with: Russian Vodka of course!