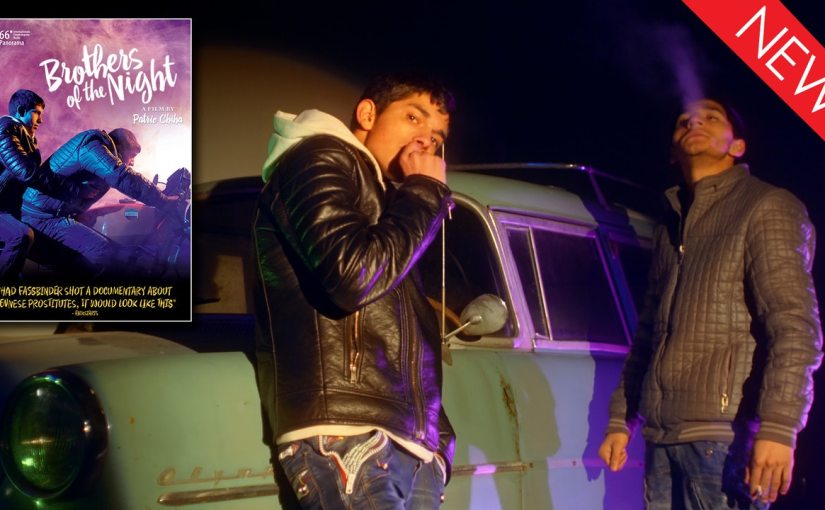 Title – ‘Brothers of the Night‘

The dark of night, the smoke-filled alleyways leading to neon-lit signs beckoning with promises of youth, money, and sex, the men lined up waiting for a hot trick or two (or three). Europe is full of such places and it’s usually not the local boys and men that make up the workforce in this sector of business. Immigrants, usually the illegal kind, are most of the hustlers you’ll find in the western European countries.

Enter Patric Chiha’s ‘Brothers of the Night‘ – a docu-fiction hybrid that explores the realm of Buglarian Romani prostitutes in Vienna. While there are many documentaries about male prostitution (we gay men do seem to be fascinated with that topic…) already available, Patric’s movie takes a very different approach in respect to honoring the mystery of the ‘men of the night’. Just like you can’t trust the man you hire in real life to reveal who he really is, we can’t trust the men in this movie to completely tell the truth of their lives.

The men in this movie have all come from Bulgaria, a country that has the highest percentage of Romani people in all of Europe. Over the course of the movie we follow gypsy men like Stefan who after marrying young and incurring debts decided to come to Vienna to find higher paying jobs. Upon arriving he figured out that there weren’t any jobs and was introduced to hustler bars like ‘Rudiger’ where older men and younger hustlers mix and make deals in bathrooms.

Patric Chiha who previously directed the sensuous film ‘Domain’ with Beatrice Dalle weaves many inspirations from previous films into his creation, but the one that strikes me as having the most influence is the director Wiktor Grodecki known for his work on the male hustler documentaries ‘Body Without Soul’ and ‘Not Angels But Angels’ and also the fiction film based on male hustling, ‘Mandragora’. Grodecki’s films combined a precise mix of compassion, voyeurism, and above all an appreciation of stylized cinematography and lighting that I find extremely present in ‘Brothers of the Night‘. Although we could say that Grodecki took that technique from Fassbinder who doused the famous film ‘Querelle’ in yellow, orange, and pink to highlight the hedonistic playground that the handsome sailor wandered through which is obviously a gigantic influence on Chiha’s vision of the hustlers that live near a large river.

To end this rant I’ll leave you with a statement from the director, but lastly my advice is to get lost in the world that Chiha is created. Don’t think too much about it, but enjoy the sights, sounds, and personalities of these wild Romani boys. Ciao!

Director’s Statement:
When I found myself stuck in a very strange pub in Vienna one evening, I knew I’d found my next film: The bar was sleazy yet aesthetically pleasing in a tacky kind of way, as if from a different time. Lonely old men sat while proud, capricious young men pranced around the pool table, immediately reminding me of Pasolini or Fassbinder’s broken heroes. It had been a long time since I’d seen bodies like theirs in film, the playful way in which they moved, danced, loitered and chatted away. I wanted to get to know these people and to film them.

The boys are young Bulgarian Roma who have left behind poverty, their families and social customs. But they’re not really free in Vienna either. They’re divided. On the one hand, they have to have sex with men they find physically repulsive, but, on the other hand, they can finally be young here, far away from their wives and children, far away from their responsibilities.

I didn’t want to make a film about them, but rather with them. It had to be full of energy and playful. They play roles when they’re at work. In their everyday lives, they’re always acting. Their lives are full of fiction, full of the stories they tell each other. They’re proud. Generous. Imaginative. Irresponsible. On the hunt. So I went in search of a style that would do them justice. We decided on everything that was directed and staged together. Fiction can be truer and more real than having a camera that just stares at economic or social ills. But in this film – as is the case with the boys’ lives – the boundaries between reality and fiction, between looking in the mirror and fantasy, become blurred. Brothers of the Night is above all else a film about feelings.

Watch it with: Someone you’ve paid for

Mix it with: Viennese beer

‘Brothers of the Night’ arrives on Dekkoo this month!