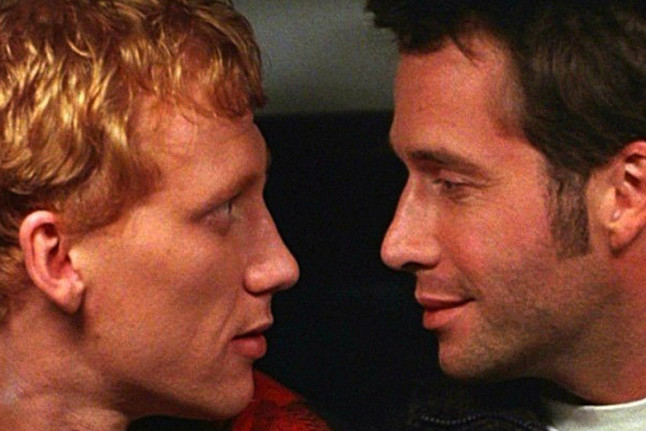 Released in 1999 (a busy year for gay cinema that included Boys Don’t Cry, Better Than Chocolate, The Talented Mr. Ripley and Trick, among others) Bedrooms and Hallways was writer-director Rose Troche’s long-awaited follow-up to her 1994 indie sensation Go Fish. This film proved a complete departure from her lesbian milestone: a hilarious comedy set in London about the tangled love affairs of a gay man.

Failed romantic Leo (Trainspotting co-star Kevin McKidd) is just hitting thirty. His kitschy roommate Darren (Tom Hollander) only reminds him of what he’s missing, merrily touting Darren’s frequent, illicit meetings with a lusty real estate agent (Hugo Weaving). So with nothing to lose, Leo joins a men’s group to bond with his fellow males and get his mind off romance. However, the latter notion didn’t account for sexy straight Irishman Brendan (James Purefoy). But wait… is Brendan straight? For that matter, is Leo? Life is never as black and white as it seems, especially after Leo and his group go on a drum-thumping, chest-banging camping retreat where a snarl of love triangles and jealousy explodes.

Colorful production design, glossy production values and an energetic ensemble cast (including Simon Callow and Jennifer Ehle) contribute to the lighthearted proceedings, of which Hollander takes the cake. Darren’s snippy dialogue and misinformed sexual antics are a true highlight.

Two decades ago this year, before she became one of the masterminds behind The L Word, Rose Troche rattled the straight/gay/bi boundary lines and shook the sexual tree. The result is a knee-slapping spoof of gay life at the turn of the millennium and the New Age movement, as well as a witty and prescient send-up of any and all rigid notions of sexuality.

Bedrooms and Hallways is now available to stream on Dekkoo.