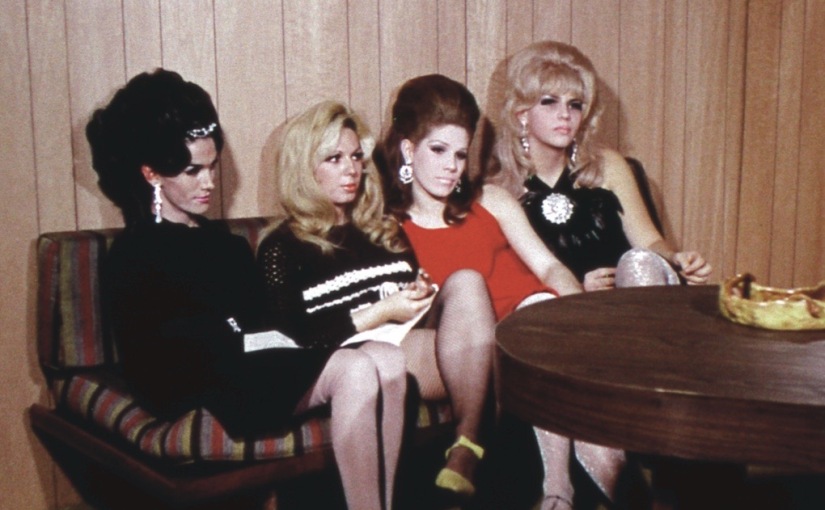 For contemporary LGBT viewers, Queens at Heart offers a vivid and compelling lens on how far we have come as a movement while also giving a deep (and wildly entertaining) understanding of what it was like to be transgender at a very different time in history. There are very few filmed images by or about LGBT people before the Stonewall Riots of 1969. There were especially few portrayals of trans lives and experience in this era. The two other films that come to mind from this period are: the remarkable feature documentary, The Queen (1968) and the short documentary portrait of an African American trans woman, Behind Every Good Man (1967). (While the 1970 dramatic feature, The Christine Jorgenson Story is at least somewhat well intended, it primarily comes across as lurid and sensationalist.)

Produced in New York City in 1967, this amazing 22-minute short introduces us to Misty, Vicky, Sonya and Simone — four courageous trans women who candidly discuss their personal lives with a lurid male interviewer who claims to have spoken to “thousands of homosexuals” (and who clearly doesn’t understand the difference between sexual orientation and gender identity). The film offers an extremely rare and poignant glimpse into pre-Stonewall queer life as it takes us to a New York City drag ball and follows the women through their daily lives. They talk about their double-lives — going out as women at night but living as men during the day, and about how they take hormones and dream of “going for a change.” One talks about avoiding the draft, another about her fiancé and another about the torment of childhood as an effeminate youth.

“We know that homosexuality is a psychological aberration that should be treated,” proclaims the interviewer as the film ends. Shifting to a surprisingly sympathetic tone he then concludes with the provocative challenge, “but what about those who don’t want to change? Who are we to judge?” This flip-flop perfectly encapsulates the film’s schizophrenic combination of attitudes as it alternates between luridness and validation, judgment and empathy.

Of course it is extremely significant for us to be able to look back and see this rare portrait of four wonderful trans women being so candid and courageous in the years before Stonewall. Queens at Heart is especially remarkable for how candid and brave the women are in expressing themselves so vulnerably when we can tell that the film was produced more as an exploitation film than as a serious documentary.

As a film historian and archivist I’ve unearthed many films over the years. Queens at Heart is the most significant on every level. It is a film that had been essentially lost to us — with nothing having previously been written about it in LGBT film literature. As a glimpse at pre-Stonewall queer life it is remarkable: from the wonderful footage of the drag balls and gay men dancing together to the provocative interviews with transgender women which are truly jaw-dropping in their candor. The power of this film for bringing us face to face with our forebears (and queer life in 1967) is absolutely incredible, and the film is of even greater interest in this era of increased trans awareness and activism.

Queens at Heart is a tremendously valuable archival portrait of pre-Stonewall trans women — their candor and courage are a true gift and this is a must-see film for anyone interested in transgender history.

About Jenni Olson:
Jenni Olson is an LGBT film historian, archivist and filmmaker based in Berkeley, California. Her work as a film historian includes the Lambda Award nominated The Queer Movie Poster Book (Chronicle Books, 2005) and her many vintage movie trailer presentations (Homo Promo, Trailer Camp, etc.). She is on the Advisory Board of the Outfest UCLA Legacy Project for LGBT Moving Image Preservation.